My favorite of the signs which have appeared online: 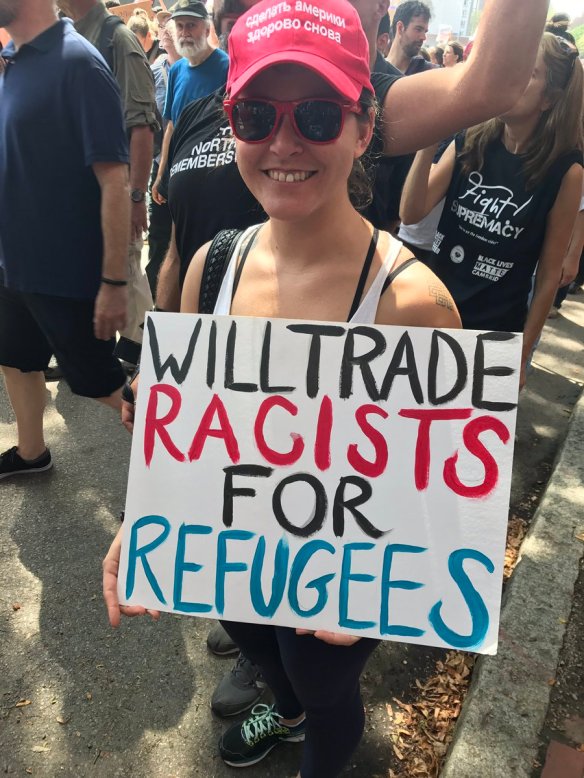 Van Jones, walking down the street to his next meeting, is hailed by a group of Trump supporters from InfoWars. He stops and … talks to them for half an hour. Most astonishing of all: he impresses them!

As an intentionally TV-less person, and one who in any event avoids cable news like the plague, I’d never heard Van Jones speak until a year or so ago, when he gave a public talk at a nearby college (introduced by Bill McKibben). His life story was impressive, and his message inspiring.

Heartwarming to see the receptivity here.

“This is very important now: the only way this thing works is if you cry just as much when that black man dies in that police car, and I cry just as much when that horrible bigoted sniper shot down those police. If you’re crying over those funerals and I’m crying over those funerals, and we’re both crying together, we can find a way to get our cops to be better and get our kids to be better. But if we decide we’re gonna pick funerals, that’s the worst thing in America. We’re now picking which funeral we’re gonna cry over…

So listen. When we come together the right way, the Republicans talk about liberty, individual freedom, limited government. Democrats talk about justice … what about the little guys getting run over? Liberty and justice for all: that’s America. So that’s how it’s supposed to be. That’s how it’s supposed to be. But what’s happening now is: if you’re for liberty I call you a racist; if I’m for justice you call me a socialist. And then we never can get along. Well that’s gotta stop. That’s gotta stop.”

This is the best thing I’ve read on the appalling events of the past week:

Can we find the character, as Americans, to open our hearts to each other?  Can we see in each other a common humanity and a shared dignity, and recognize how our different experiences have shaped us?  And it doesn’t make anybody perfectly good or perfectly bad, it just makes us human….

With an open heart, we can abandon the overheated rhetoric and the oversimplification that reduces whole categories of our fellow Americans not just to opponents, but to enemies.

With an open heart, those protesting for change will guard against reckless language going forward, look at the model set by the five officers we mourn today, acknowledge the progress brought about by the sincere efforts of police departments like this one in Dallas, and embark on the hard but necessary work of negotiation, the pursuit of reconciliation.

With an open heart, police departments will acknowledge that, just like the rest of us, they are not perfect; that insisting we do better to root out racial bias is not an attack on cops, but an effort to live up to our highest ideals.  (Applause.)  And I understand these protests — I see them, they can be messy.  Sometimes they can be hijacked by an irresponsible few.  Police can get hurt.  Protestors can get hurt.  They can be frustrating.

But even those who dislike the phrase “Black Lives Matter,” surely we should be able to hear the pain of Alton Sterling’s family.  (Applause.)  We should — when we hear a friend describe him by saying that “Whatever he cooked, he cooked enough for everybody,” that should sound familiar to us, that maybe he wasn’t so different than us, so that we can, yes, insist that his life matters.  Just as we should hear the students and coworkers describe their affection for Philando Castile as a gentle soul — “Mr. Rogers with dreadlocks,” they called him — and know that his life mattered to a whole lot of people of all races, of all ages, and that we have to do what we can, without putting officers’ lives at risk, but do better to prevent another life like his from being lost.

With an open heart, we can worry less about which side has been wronged, and worry more about joining sides to do right.  (Applause.)  Because the vicious killer of these police officers, they won’t be the last person who tries to make us turn on one other.  The killer in Orlando wasn’t, nor was the killer in Charleston.  We know there is evil in this world.  That’s why we need police departments.  (Applause.)  But as Americans, we can decide that people like this killer will ultimately fail.  They will not drive us apart.  We can decide to come together and make our country reflect the good inside us, the hopes and simple dreams we share.

You can watch the entire address here.

I’m grateful for the honesty, graciousness, and compassion on display in this meeting with members of the press. And relieved to hear that, contrary to previous reports, it appears that Officer Jones has been neither fired nor suspended. According to Cleveland 19 News, “Mayor Brad Sellers said Jones did not violate the social media policy that is currently in place. She is currently on full duty at the police department and there were no violations of any policies with the City of Warrensville Heights.”