And speaking of The Story of Film, there’s an interview with Mark Cousins here about the series at the Watershed in Bristol (a place I used to live down the road from). Cousins’s passion for the cinema really comes across. 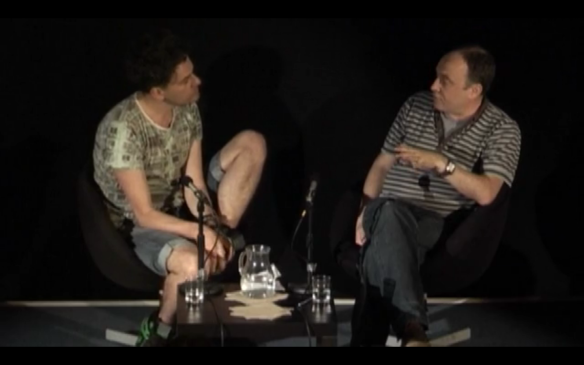 I’m really interested in this idea of how you build an appetite for something. When I was writing the book of The Story of Film, I was desperate to see this Ethiopian film – Harvest: 3,000 Years. It took me about two months, and $170, to get my hands on this. And now it’s literally a click away. So I think the longing for cinema, the desire for cinema – you know it’s similar to eros in some way – people don’t need to long for it in the way that they did previously, so there’s not that difficulty anymore….

I first heard about Citizen Kane nine years before I could get to see it, so that was nine years of expectation and imagination. And boy does that add something. There’s a kind of suspense in that, you know. So that’s gone. But something else has replaced it, which is a kind of ultra-availability, and that has its own pleasures and its rewards. And you can sort of binge in a way that you couldn’t previously.

So I think just the culture has changed, and what the role – I don’t need to tell you this, because Watershed is such a beacon for this kind of thing – but the role of Watershed and places like this is to put on Carl Theodor Dreyer films at lunchtime, which you’ve done – beautiful idea – and say to people: look at this splendid thing. And the fact that Adrian can do a score for one of the greatest films ever made, The Passion of Joan of Arc. This is a way of saying to people, within all that blurry, overwhelming, smorgasbord plenitude of what’s out there: look at this thing, look how splendid it is.

That’s why we’ve got Lars von Trier in here saying: Dreyer is the greatest. Trier says Dreyer’s films are like a good soup when you boil them down and down to their essence, which is a lovely way of putting it.

And I think I’m quite an optimist about people and audiences. People want enriching experiences and they want connective tissue. And they want to go away from a lunchtime screening, having felt: wow, I saw something – that lovely phrase that Fenner Brockway, the politician, said: see the flame and go towards it. That’s what people want, you know. But there’s lots of stuff and noise in the way, cultural noise.