This one took me by surprise. It’s a film documenting the relationship between the Dzogchen teacher Namkhai Norbu and his son, now known as Khyentse Yeshe (Dzogchen is a term indicating the pinnacle and most direct path within the ancient Nyingma tradition of Tibetan Buddhism.) Filmed over the course of 20 years by Jennifer Fox, it surely must represent the most intimate visual portrait of a Tibetan lama to date. At times watching it, in fact, it’s hard to fathom how a family would put up with that degree of intrusion for so long: we see them at the dinner table, preparing for teaching events, and discussing all kinds of personal matters. It caused me to remember a comment in one of Trungpa Rinpoche’s books, to the effect that a bodhisattva has no room for privacy in their life at all, is completely open to the demands of the world.

Namkhai Norbu, like a number of eminent teachers but unlike so terribly many more, managed to escape over the mountains from Tibet in 1959, during the Chinese invasion. He ended up in Italy, where he still lives, and married an Italian woman. At the beginning of the film his son Yeshi – as he was then called – is about 17, deeply respectful of his father but not all that connected to the practice of buddhism. We hear him lament the relationship he has with his father, which lacks the kind of ordinary, Italian familial warmth he wishes for. 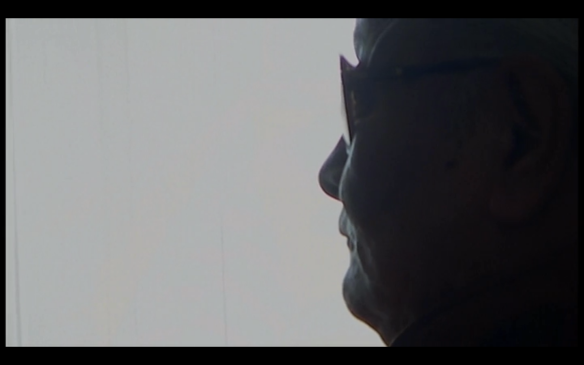 But that relationship contains an added wrinkle, because Yeshi, when still in his mother’s womb, was “recognized” as a tulku, the rebirth of a lama – in this case Namkhai Norbu’s own uncle, Khyentse Rinpoche (not the most famous such with this name, Dilgo Khyentse Rinpoche, but a lama who died in Tibet at the hands of the Chinese). Without pressuring his son either to take up his vocation or even to practice, he nonetheless has made it clear how important a responsibility he feels is on Yeshi’s shoulders. And many others around him, too, have high expectations and await the time when he will begin to manifest as a teacher. Yeshi himself remembers many dreams he had at a young age of particular places in Tibet he had of course never seen. However, he chooses a job in the business world, marries, and begins raising a family.

The film moves leisurely through the years, giving us glimpses of Namkhai Norbu teaching and relating to his students.

We see him, very ill, in a hospital bed, and then well again and out in the world (having decided, he says, that he needed to stay alive and continue teaching). And we also see – a highlight of the film – wonderful and equally up-close footage of the Dalai Lama during a visit to Italy (in the stills below Yeshi at about 17 is in the foreground). 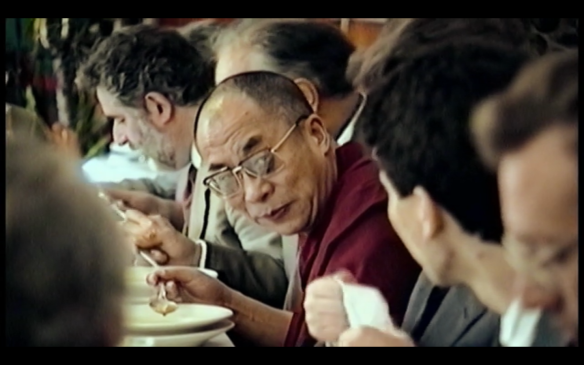 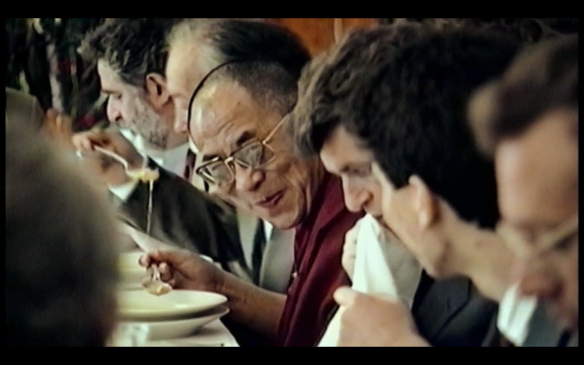 At a certain point I realized the film had crept up on me in a remarkable way. Yeshi begins involving himself more and more in Dzogchen practice and helping his father during teachings and empowerments. And then one day, without particular fanfare, he decides finally to visit Tibet, where he has been awaited by students of the previous Khyentse Rinpoche for over 40 years…

Those for whom the entire tulku system is alien and maybe even suspect might not know what to make of this portion of the film. I place myself somewhat in the middle between such a group and those who have strong faith in that system – though probably a little closer to the former – yet I found these scenes very moving.

The film ends with Yeshi beginning to teach as a lama himself – in a casual, 21st-century-style. He comes across as very genuine and open throughout the film, and in a scene between him and his father at the end there is a greater ease between them that is lovely to see. Here, Namkhai Norbu is playing the flute and joking that it would have been “much easier” if he’d chosen to be a musician instead of a teacher… 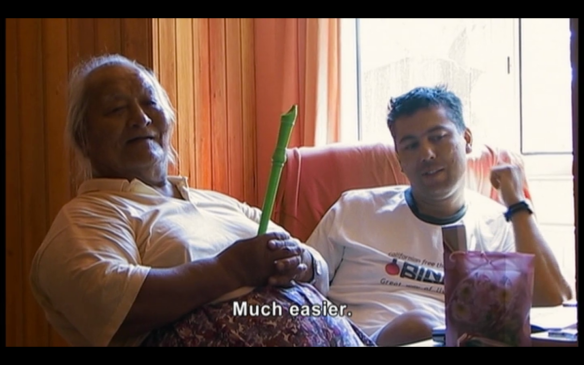 In fact, I liked this so much I ended up watching it again a couple of days later… All in all, quite a beautiful look into the life of a beloved Tibetan lama, the pressures and difficulties of being a son of whom very much is expected, and the journey which the latter takes to come fully into his own.