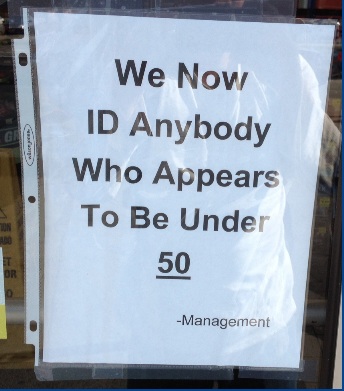 I took this photo last summer. The sign appears in the window of a service station/convenience store in upstate New York and provides, I think, an especially compact illustration of an entire story that can be told about our collective psyche these days.

Before telling it in my next post, a few words as introduction:

It’s not hard to see that fears have a kind of self-propagating or self-aggrandizing power. They are ravenous, ever-expanding, until we can begin to examine them. This is so because fear designates precisely that which is beyond the pale, unencounterable, for what cannot be faced becomes to that extent inescapable. Ordinarily we see this most clearly in nightmares, when we are at the mercy of our mind’s projections. Within the nightmare we are bodiless and so running away doesn’t – can’t – succeed: we are attempting, impossibly, to flee ourselves.

The Tibetan lama Chögyam Trungpa taught that becoming a “warrior” (in the sense of a spiritual warrior) does not mean being free of fear or cultivating a tough exterior. Rather, it arises out of a very different quality, which is the capacity to open fully to the world, to allow the world with all its phenomena in, so that we can actually be touched by it. He suggested that when we do so its effect is to soften us, and that out of this “tender heart of sadness,” as he called it, our long-cultivated dualities of Self and Other can begin to soften too. The Berlin Walls in our minds become more permeable.

A glimpse of genuine fearlessness can arise out of this experience because in that moment we are not trying to protect ourselves and our territory in quite the same way. Ultimately, we fear anything which threatens our belief in a separate, independent, unchanging Self. It naturally follows that allowing our habitual defences to soften, “letting the world tickle our raw and beautiful heart,” as Trungpa so wonderfully put it, fosters the birth of true warriorship.

(From this standpoint an American president once said something truly profound – who’d have thought?!: “the only thing we have to fear is … fear itself.”)

Returning to nightmares in this context, I’ve been told by more than one person that if, when confronted by a monster in a dream, we can stay with it, face it, ideally even take a step in its direction, it will lose its power over us, even dissolve or turn into a harmless- or sad-looking cartoon character. Best of all is when the dreamer is able to feel a sense of compassion towards it.

So then, what happens when we do the opposite, when instead of trying to take a step forward, even a tiny one, or at least not running away, we … slowly back up, in rising panic. Or just turn round and run for the hills. Does the fear go away?

Well, how can it? We’ve only shored it up, made it even more solid. From this standpoint “fear itself” is nothing other than the duality we continuously strengthen. It resides in and arises from precisely that ultimately non-existent gap between self and projection. But the more powerful we allow it to become, the more layers of protection we will find ourselves creating. The whole thing becomes tighter and tighter. And more and more demons have to be invented too – scapegoats we sacrifice to keep the nature of reality at bay.

A metaphor that comes to me often in thinking about this is that of an onion. If the core of the onion represents a fear we cannot even look at, we create a layer around it as opaque as possible. But if for various reasons the fear is so strong that one layer isn’t enough, we add a second – we put something in place which protects us from our initial barrier that we realize is not 100% strong enough. And then sometimes we need a third layer if we sense the second itself may be a bit fragile. So that when something becomes so taboo that we are incapable of looking at it at all, incapable of any kind of reasoned response, the end result is hysteria – and loss of humanity.

In the next two posts I try and deconstruct, fairly thoroughly, the quite numerous layers of that onion of fear which are embedded in the photo above. And suggest that in America today this approach has become our routine, automatic, indeed pathological response to insecurity and uncertainty of all kinds.