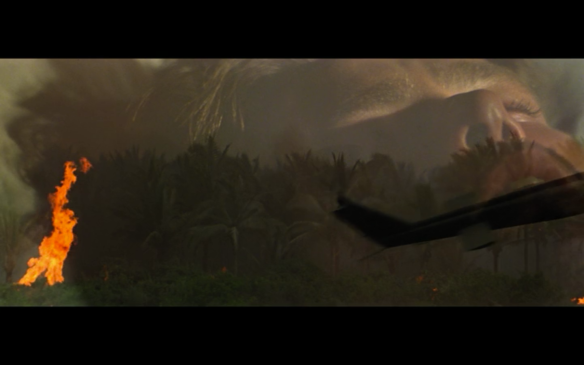 I remember the first time I saw this film and how that introductory scene sucked me in instantly. The first faint, ominous sound of the distant helicopter, perennially presaging slaughter, as we will soon realize. (My first synth, an old Roland D-50, contained just that sound and called it, yes, “Apocalypse Now.”) Willard’s mind, lost, roaming feverishly in the jungle. Morrison’s pitiless voice, singing goodbye to his beautiful friend.

I love films that promise an open-ended journey of some kind, where the world keeps expanding along the way, becoming ever stranger and more intricate. Vast, and then vaster. That’s partly why I prefer the first of the Lord of the Rings films, before the battles really take over. That sense of warm, comfortable, self-contained Hobbiton slowly opening out into the farther reaches of the Shire. Those first disturbing brushes with the ring-wraiths, and then … Bree, the world of Men.

And then … the big country – approach of mountains, realm of elven sacred space, dwarf-land deep in the earth, wilder and more unpredictable terrain, and finally … we reach the Great River, bordering, essentially, the end of the world. The final chilling scene of Frodo and Sam on the mountain, gazing out at that end, that terrifying unknown, and knowing it is their destination to enter its very heart.

After a bunch of weeks with no time for movies, I’ve been able to fit some in recently, and oddly even this one has a scene echoing that experience, although on a far smaller scale of course.

The previous time I’d seen The Night of the Hunter I’d been distracted by some of the melodramatic aspects and the at times cheesy 1950s-style acting. This time though I was able to let enough of that go to focus on the film’s mythological quality.

I don’t mean “good vs. evil” so much, or even “the story of love and hate” (told by the utterly deranged and murderous “preacher,” played by Robert Mitchum, with the help of his knuckles). Rather, I think the movie is trying, in part anyway, to evoke the experience of “innocence” somehow, reaching towards some sense of it. It’s the lengthy river scene that most points in this direction. There is no dialogue – just the famous expressionist cinematography carrying the two children … where? They have no idea, no destination. They have suddenly entered a strange, enormous, uninhabited world of earth and sky and stars, with no map and no plan. They only know that forward is the only way to go.

Rivers so often function this way in stories, as the borderland between safety and danger, known and unknown. The depths of the jungle where Kurtz rules, too, is another world — no ordinary civilization holds sway there. And the eerie, mirage-like river journey that takes us there has a spiritual quality. An old track from the Aloof samples it (and the great lama Trungpa Rinpoche said much the same thing): “Never get out of the boat. Absolutely goddamn right. Unless you were going all the way.”